The area around the Atomic Weapons Establishment (AWE) Aldermaston within which emergency planning measures are considered necessary to protect the public has been reduced in size by more than a quarter following a review by the government's nuclear safety watchdog.  The emergency planning area has been amended to reflect geographical features such as roads and the boundaries of the areas where people live, and to reflect changes in the hazards and risks resulting from operations at AWE Aldermaston.

In some places the new boundary extends further than the previous one, but it is smaller in other places and overall the size of the area has been reduced from the 3 km radius circle centred on the AWE site which formerly set the limit of the zone.  According to AWE the size of the emergency planning area has shrunk from area 28 square km to 20.5 square km, and the number of residents living in the zone will drop slightly from 17,208 to 17,100.

The changes to the zone are the result of a three-yearly review which has been conducted by the Office for Nuclear Regulation (ONR), based on a Hazard Identification and Risk Evaluation (HIRE) conducted by AWE.   Now that the zone has been agreed with the ONR West Berkshire Council will be required to produce a new off-site emergency plan that will be put into place if there is an accident.

ONR has adopted a new approach to defining emergency planning areas since the Aldermaston zone was last determined in 2013, and its new methodology now looks at the specific part of a site where radioactivity would be produced in an accident and draws the boundary based on those areas, taking into account specific local factors such as the layout of local communities and the inclusion of areas where there may be vulnerable people such as schools and care homes.

The press release produced by ONR states that the size of the emergency planning area has been reduced in size due a “reduction in the hazards and risks of a radiation emergency”, but no details have been published to support this conclusion. The HIRE document produced by AWE has not been made public, although the company is required to summarise the contents in a public document called a Report of Assessment (RoA). The RoA that AWE produced in 2014 contains general descriptions of best practice nuclear safety design principles and some basic information about the safety precautions at Aldermaston, but does not offer any specific information about a decrease in risk and assumes that the previous 3 km zone would remain in place. 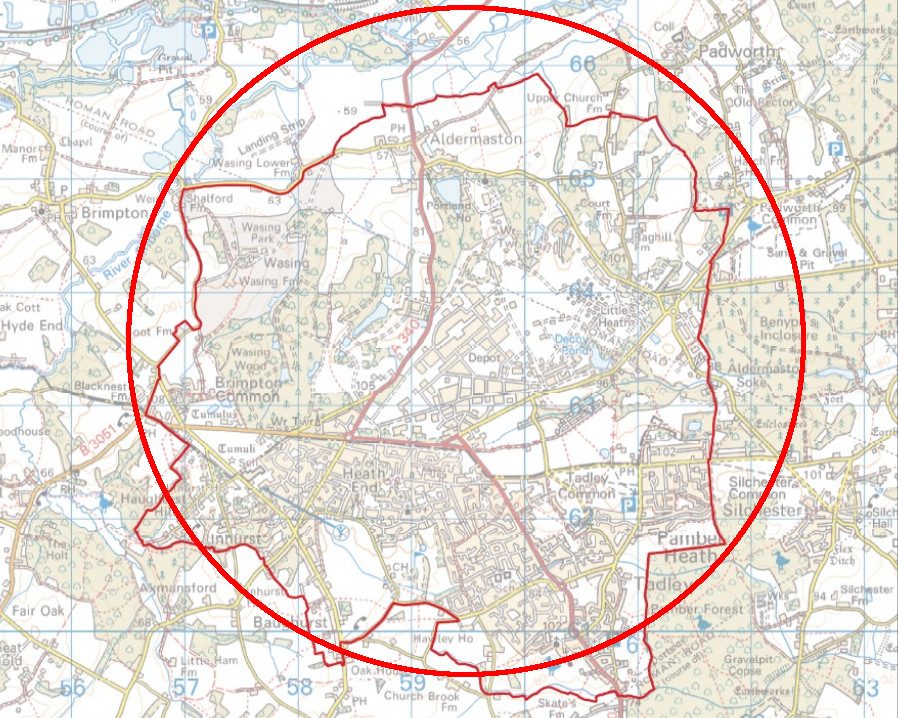 The accident scenario used to determine the extent of the zone is a seismic event leading to fires in several buildings at Aldermaston with the wind direction resulting in radioactive plume from all fires becoming combined. This is considered to be the most dangerous event which is “realistically possible” at the site according to AWE's assessment. The size of the emergency planning area is based on calculations of the radiation dose to members of the public at various distances from the site under this scenario. The 3km zone was set 1km beyond the distance at which someone would receive a dose 5 times the maximum recommended annual dose for a member of the public. The scenario assumes that in an accident people in the exclusion zone would be asked to stay indoors or evacuated for their own protection.