The Ministry of Defence (MoD) has announced its final shortlist of candidate sites for the storage of intermediate-level radioactive waste from decommissioned nuclear-powered submarines and is about to embark upon a fourteen-week programme of public consultation to select a suitable storage site for the waste.

In a written Parliamentary statement Philip Dunne, Minister for Defence, Equipment, Support, and Technology, announced that the five sites provisionally shortlisted as potential storage sites –
the Atomic Weapons Establishment sites at Aldermaston and Burghfield in Berkshire, Capenhurst in Cheshire, Chapelcross in Dumfriesshire, and Sellafield in Cumbria – would all be included in an unchanged final shortlist of sites following pre-engagement discussions on the list of sites.

Mr Dunne announced that the final selection of the storage site will be made on the basis of whole life costs for each site, the operational effectiveness of the site, the results of strategic environmental assessment studies, the project schedule proposed by the site owner, and “other contributory factors” such as anticipated public opinion, policy and planning in each area.

MoD's submarine dismantling project will oversee the decommissioning of 27 Royal Navy nuclear submarines that will have left Naval service by the mid 2030s , including 19 submarines that have already left service and are stored afloat at Rosyth and Devonport naval dockyards.  Under current plans the submarines will be dismantled at Rosyth and Devonport.  Intermediate level radioactive waste will be removed from the submarines and transferred to an interim storage site, where it will remain until well after 2040, when the planned geological disposal facility for the UK's radioactive waste is expected to open.

The consultation process on selection of an interim storage site will seek views from the public and other stakeholders, and will begin on 14 November 2014 and end on 20 February 2015.   There will be a series of exhibitions and workshops close to all five shortlisted sites, together with two national workshops (see table).  A final decision on the selected storage location is expected to be announced at the end of 2015 following the general election. 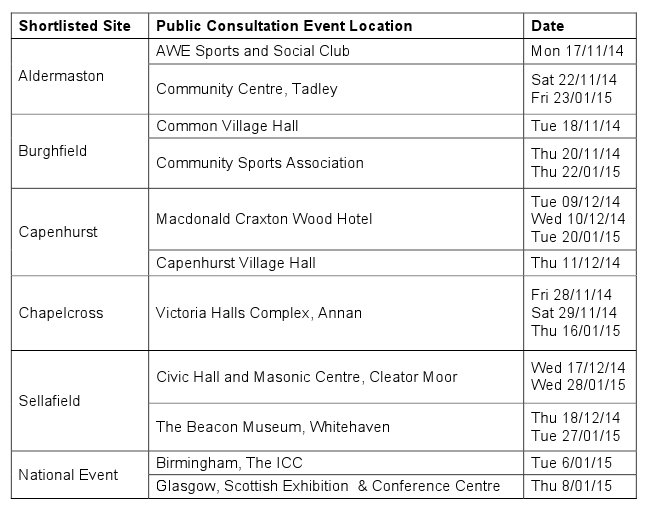 Defence Minister Philip Dunne said the pre-consultation analysis had not presented any grounds for discounting any of the sites on the provisional list.  However, the Scottish Government has expressed opposition to the storage of submarine waste at a site in Scotland.  Scottish Environment Secretary Richard Lochhead said: "I have previously written to the MoD to make the case that this waste should not be stored in Scotland and reiterated the Scottish Government's position when I spoke to the Minister. Scotland must not be turned into a dumping ground for MoD nuclear waste.

"The Scottish Government will be continuing to make the case that waste arising from the MoD submarine dismantling projects in Rosyth and Devonport should be stored elsewhere and the MoD consultation document identifies other potential storage locations, including MoD sites."